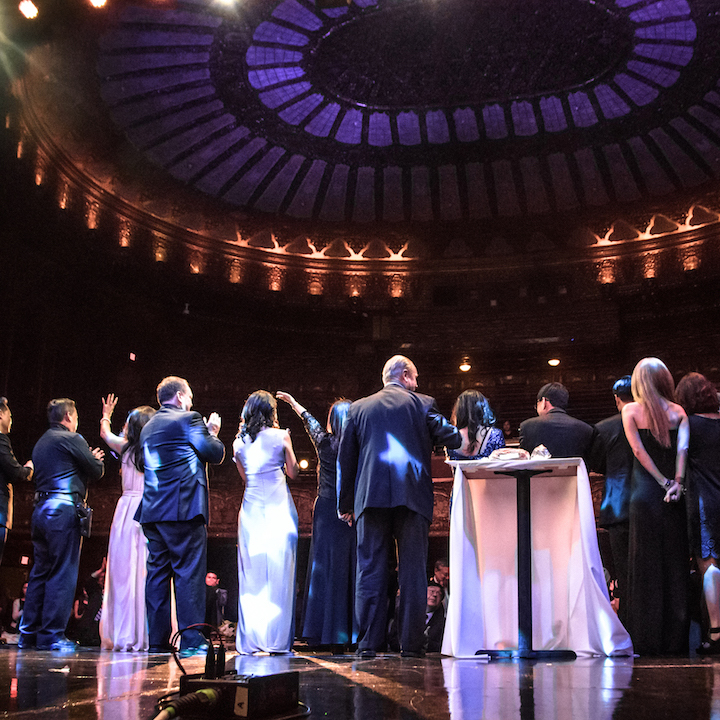 Los Angeles, CA – On Tuesday, November 15, 2016, KCCD held its 15th Anniversary Gala Dinner & Community Kick-Off of 25th Anniversary of the LA Riots Commemoration SAIGU Campaign at the historic Belasco Theater in downtown Los Angeles. With over 300 in attendance, various local, state, and national elected officials and/or their offices, along with KCCD friends, partners, board members, donor advisory board members and funders celebrated this momentous occasion.

With Richard Lui, MSNBC News Anchor and Larissa Lam, an award-winning singer, music composer, and TV/radio host as Emcees, the Gala Dinner opened with performances of Canon in D by Pachelbel and Arirang from the Open Academy Los Angeles Youth Orchestra led by Jiah Kim.

Richard Lui shared why he was honored to come and be a part of the Gala Dinner. “One of my first stories as a journalist was the Rodney King Riots (Los Angeles Riots). So being back here as we are kicking this off (LA Riots Commemorations SAIGU Campaign) over the next year, I could not help but remember my first story. It is a real honor to be here.”

“I can’t describe in words how fulfilling it was for me to work on this effort as Dinner Co-Chair. Thank you all for being a champion and for everyone here tonight supporting KCCD and the Gala. I believe in having a purpose in what we do and this event certainly serves a purpose that is critically important to all of us in this room – empowering our community.” Jihee Huh shared.

As the City of Los Angeles Mayor Eric Garcetti could not attend, Chief of Staff Ana Guerrero provided remarks on behalf of the Mayor. “He is sorry he is not here personally… He sends his love and respect to KCCD, to Hyepin Im, and to all the honorees.” Ms. Guerrero shared how important KCCD’s work is to the Mayor. “We are very, very proud to partner with KCCD on many fronts. What I am most proud of is the work we have done with KCCD to change the face of City Hall… and to develop leaders that believe in bringing people together, that believe in Leading with Love, leaders that believe in bringing a prosperous Los Angeles for everyone.”

KCCD also announced its name change to Faith and Community Empowerment (FACE) which will be effective in the new year. KCCD President Hyepin Im shared the reasons for the change – “How can we create a tent that is much more welcoming, for those we serve that are not Korean? And so we thought of the name FACE, Faith and Community Empowerment.” Through FACE, Hyepin Im mentioned that the organization will continue to “bring the face of God through our service and lift those who are faceless.”

Renowned saxophonist Danny Jung, provided amazing performances with renditions of My Love by Paul McCartney and Because of You by Ne-Yo.

Additional performances from Tammy Chang and Sarkis Khachatryan, in which Tammy Chang sang At Last by Etta James and a special rendition of Empire State of Mind by Jay-Z feat. Alicia Keys was done by the duo.

The Gala Dinner honored several distinguished individuals and organizations to recognize their work in the community by “Leading with Love”. The distinguished honorees include:

“Thank you KCCD/FACE. Hyepin Im often gives credit to Rev. Cecil Murray and me for offering a model for community and economic development within a faith-based setting. She is stretching the truth – She is a co-author of what we could achieve at FAME. We thank you for giving us an opportunity to partner with an awesome woman of God, Hyepin Im.” – Rev. Mark Whitlock

“Thank you very much to KCCD/FACE. On behalf of the 9,000 associates at Bank of America, we really want to thank you. It has been a great partnership, which started 15 years ago with my predecessors. I started working here back in 1992, such a monumental time to come right after the civil unrest. There was a lot of discussion asking what will be done to rebuild the city and we are at that point again where we all have to do our part. But I look at us with optimism and with FACE, with their involvement and leadership to make our communities much better. And I look at it with a very bright future.” – Raúl Bustillos

“I want to send my gratitude to KCCD and Hyepin Im for this honor. Their great works supporting the Los Angeles community is to be commended as they give a much-needed voice not only to the Korean Americans in Los Angeles but to Asian Americans across America. I am humbled that I am being recognized to such regard. I have used my recognition to further Koreans and Asians in the baseball community. For the past 18 years, I have sponsored little leagues and hosted children camps in hopes of cultivating talent in South Korea. An honor like this lights a fire in me in wanting to do more. Congratulations to KCCD for 15 years of supporting our communities.” – Chan Ho Park

“I want to thank KCCD, now FACE, the extraordinary passion and work conveyed through love by Hyepin Im, the Board of Directors and the host committee does for all of us. We are so blessed to live in this community and I am inspired by your work. And I hope we are all inspired by each other.” – Treasurer John Chiang

“I want to thank KCCD for this incredible honor. A rabbi once said that if you save one life, you save the world. KCCD does that every day, at scale. I would make one change to that statement – when we save one life, we save the world. I feel very privileged to touch the lives of children not just here in Los Angeles, but in countries halfway around the world and I would not be able to do that without the support of the doctors at Children’s Hospital Los Angeles.” – Dr. Thomas Lee

Dinner Co-Chair Julia Gouw remarked “Dr. Jannah Scott has been an active partner with KCCD in many of its initiatives, including KCCD’s disaster readiness seminar. Dr. Scott has served in many capacities with the government, faith, and nonprofit community for the last 35 years. Her most recent endeavors include modeling whole community engagements in crisis management. Jannah also helps groups connect with President Obama’s White House Office of Faith-based and neighborhood partnerships and the fourteen other Centers in government. Her passion to see people everywhere achieve their God-given potential, living in an atmosphere where love, dignity, righteousness, and justice prevails shines through in all her services.”

John Lim, son of Rev. Dong Sun Lim received the award on his father’s behalf and provided remarks. “Thank you so much for this tribute and to honor my great father. To me, he was an amazing, very selfless, genuine, authentic man of God. He put his life mission into serving others. Always, selflessly and endless devotion. Soon after his passing, countless people reached out to me all over the world, saying what my dad meant to them in their lives, and giving them hope and courage in their difficult times. So, I am deeply humbled and honored that he was my father, and that he will always be my father.

A fireside chat was led by Richard Lui with Treasurer John Chiang, Dr. Thomas Lee, and Dr. Jannah Scott. The chat discussed key moments on what defined their leadership roles.A live auction was also held during the Gala Dinner led by Dinner Co-Chair Mark Kingston. Items that were auctioned off included a date with CA State Treasurer John Chiang which, Cancun vacation package at the Vidanta, and a 7-day retreat to the Grand Cayman Islands.

“Seeing what happened those many years ago, seemed like yesterday, but you think back and look how divided we were and look across the country today and see how it’s happened with Ferguson and Baltimore. That happened across the country but not here.” Said Sheriff Jim McDonnell. “I don’t believe that was by accident, I believe it was because of the hard work that all of you did since 1992 to build a foundation on trust, on love, and moving ahead. SAIGU is a step forward, remembering what happened on 4/29, never forgetting that, but ensuring in moving forward so that this never happens again.”

Commander Blake Chow shared the same sentiments as the Sheriff. “I have seen firsthand the changes we made here, as the Sheriff has mentioned, of 25 years ago. In 1992, this city was a divided city along many, many lines and the LAPD was an organization that had a different interpretation of what community partnership meant. So 25 years ago, I stood on the streets as people shot at me, I saw communities lose their livelihood, lose their husbands, wives, brothers, sisters, etc. My pledge to you is that this will never happen again in Los Angeles, with organizations like this.”

In closing, one of the many events to come was the announcement to join the I AM #FACEofLA Campaign to showcase the Unity and Diversity of Los Angeles. Everyone is invited to join the campaign and submitting their photos at faceofla@kccd3300.org. More information can be found at https://www.facebook.com/iamFACEofLA/?fref=ts.

The Gala Dinner concluded with an inspirational singing by all of America the Beautiful in spirit of blessing our country and our leaders!

We thank to Handel’s Ice Cream for the ice cream donation and Interactio for the translation service. We want to thank again our Dinner Committee, Co-Chairs, Honorees, Sponsors, Volunteers, Board, Donor Advisory Board and Friends who came to support our work and gala!